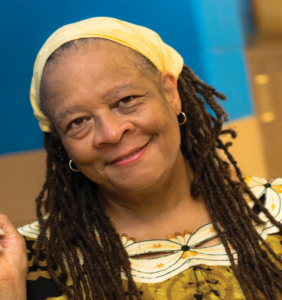 Margaret Powell is the daughter of Margaret L. and Floyd C. Ballard, Sr. The oldest of ten, Ms. Powell believes her parents’ actions and life lessons helped her understand the importance of education, building strong communities and being proud of being Black. Her parents, who grew up during the Great Depression era were her first griots, sharing their stories and  their  elders’ stories.
Introduced to the Community Healing Network and Association of Black Psychologists by Charlene Phipps in 2014, Ms. Powell began co-facilitating Emotional Emancipation Circles (EEC) in 2015 after receiving training sponsored by The Black Mental Health Alliance (BMHA). West Baltimore is the backdrop for EEC21217. The circles continue to provide safe spaces for Black people to work together to overcome, heal from, and overturn the root causes that devalue Black lives. Facilitating intergenerational healing circles is proving to be beneficial to those who participate. Participants learn from each other and work together to strengthen our commUNITY.
In segregated Baltimore in the 1950s, her mother was not allowed to have her children try on clothes in downtown department stores. So Mrs. Ballard bought fabric, made exquisite clothes for her children and also taught them how to sew. From 1957 through 2016, Mr. Ballard carried one particular account of facing racist police officers in South Baltimore as a secret, not revealing it to family until after the Department of Justice report following the death of Freddie Gray. Imagine carrying that trauma for 59 years!
Ms. Powell attended public schools in Baltimore, earned a B.S., M.S. and M.A.T. at Coppin State University, and pursued doctoral coursework in Urban Educational Leadership at Morgan State University. She was a financial aid officer and bursar at Coppin State University, spanning 27 years. After a career change, Ms. Powell taught at Matthew A. Henson Elementary School in West Baltimore for 17 years. During her tenure, she began to clearly understand that the school is the community and the community is the school. Her work at the school became an intrinsic part of her being as she passed on life lessons and the griot stories of her elders to her students. Having retired in 2016, she now volunteers at the same school every day and on some weekends.
For almost two decades, Ms. Powell served as secretary of the Matthew A. Henson Neighborhood Association and joined with neighboring associations in their work. She enjoys sharing resources so that all communities can rise up and restore our humanity.  Ms. Powell has witnessed that by working together we can heal and  Rebuild The Village .
These important components in her life continue to add to the person she is becoming. Ms. Powell has come to realize that her voice is more about what she does than what she says. That is one lesson that she not only has passed down to her students but to her son, daughter, and five grandchildren.